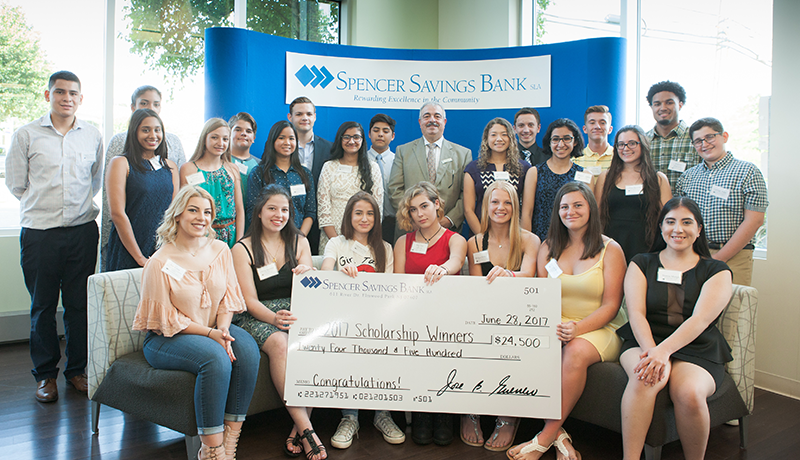 Spencer Savings Bank, a community bank headquartered in Elmwood Park, announced 32 students who were awarded scholarships and Coverdell Education Savings Accounts (CESAs). The Spencer Scholarship Program emphasizes the bank’s commitment to the community, and the importance of achieving higher learning in today’s environment. A total of $24,500 was awarded to these young scholars.

Students in each town across the Spencer footprint were eligible to apply for the scholarship program. Each school was responsible for the selection of the winners, who were judged based on their GPA, a history of community service or involvement and their potential interest in the fields of business or finance. High school recipients each received a $1,000 award and graduating middle school students were awarded with $500 CESA accounts, to encourage further savings for the future.

“Education plays a pivotal role to the growth and empowerment of our children who are the future of our communities,” said José B. Guerrero, Chairman, President and Chief Executive Officer of Spencer Savings Bank. “We pride ourselves on our local roots as a community bank and one of the most prominent aspects of our mission and purpose in our communities is to support our youth’s academic pursuits. We’re very proud of these scholars. Congratulations to the class of 2017!”

Since its inception in 2002, the Spencer Scholarship Program has awarded more than $360,000 in scholarships to students within the bank’s local service areas. In addition to the scholarship program, Spencer also hosts various financial education programs in local schools throughout the year.