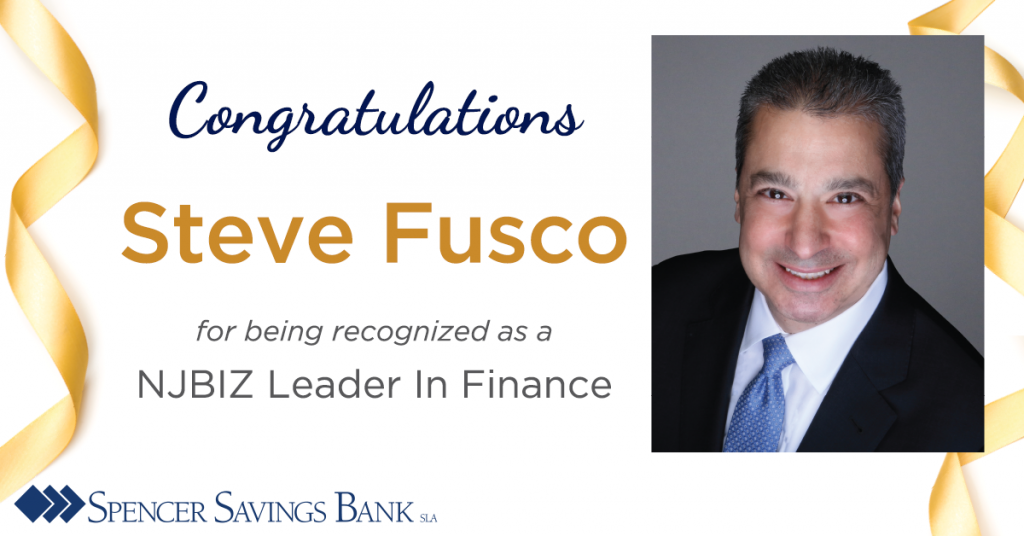 Spencer Savings Bank recently announced that Executive Vice President and CFO Steve Fusco has been named a “Leader In Finance” by NJBIZ, New Jersey’s leading statewide business newspaper. The Leaders in Finance awards program celebrates New Jersey’s financial executives at all levels who contribute to the success of their companies as well as their community.

“We are proud to see Steve recognized by his peers at the bank,” stated Jose B. Guerrero, Chairman and CEO. “Since joining Spencer just two years ago, Steve has proven to be a great addition to the Executive Management team and integral part of our company’s continued growth and success. We appreciate the contributions he makes to our organization every day.”

On March 25th, NJBIZ held a virtual event showcasing the leaders, from various industries, who were selected as finalists. Following an open nomination period, honorees were chosen by a panel of independent judges with experience in the financial field. The selections were based on the nominees’ involvement in their industries and communities, along with their achievements, energy and innovative ideas.

“I am extremely honored to be recognized with this award, humbled to be considered alongside such great honorees and proud to represent Spencer Savings Bank,” said Steve Fusco, Executive Vice President and Chief Financial Officer of Spencer Savings Bank. “Leadership involves great responsibility because you have an impact on so many people’s lives, driving both their professional and personal growth. In addition to this, you are also tasked with improving and growing your company and your community by giving back to those in need in an impactful way. I am proud of the work we do here every day at Spencer and thank my entire team for their support.”

Fusco has over thirty years of banking and leadership experience. He is responsible for Spencer Savings Bank’s finance and corporate services divisions and plays a key role in the Bank’s strategic planning process. Fusco earned a BS degree in Finance from Seton Hall University and an MBA in Management Information Systems from St. Peter’s University. He is a Certified Management Accountant (CMA) and Certified Financial Manager (CFM). Fusco is an active member of the national Financial Managers Society (FMS), currently serves as special advisor to the Executive Committee of the Board, was past Chairman of the Board and past president of the FMS NY/NJ Chapter. He is also a board member of the Meadowlands Y. Fusco resides in Upper Saddle River, New Jersey with his wife and daughters.